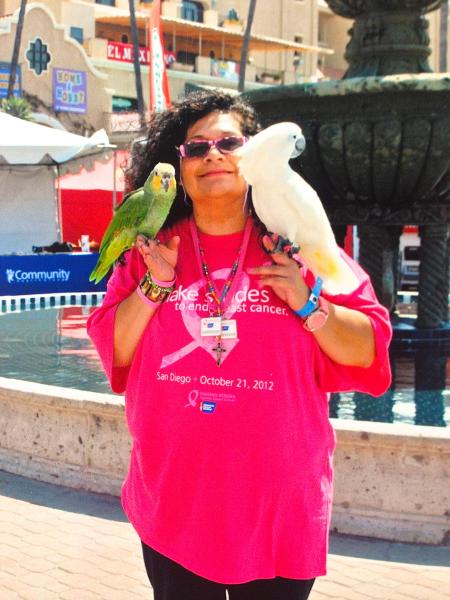 Alma Daneshi cried as she sat in her San Diego-area oncologist’s office, traumatized by past-and-present health battles that continued to endanger her life.

She had been through a brain aneurism and open-brain surgery.

She had lost her job managing a TGI Fridays restaurant while recovering from the aneurism and taking time off for cancer treatment. She got evicted and worried how she would care for herself and her then 12-year-old daughter.

Then she learned she contracted viral meningitis during treatment.

Daneshi, sitting beside her oncologist, broke down and wept.

But then she got some life-changing advice.

“My oncologist let me cry for a bit before she said, ‘Instead of crying, put your anger and sadness into something positive,’” Daneshi said. “She was on the board of directors for the American Cancer Society (ACS), and she told me I can get involved as a volunteer.”

She just won an ACS “spirit” award for her work with local Hispanics.

“I tell people help is available and prevention is possible,” Daneshi said. “It saves lives if people get preventive health exams.”

People trust her because she has overcome so many issues.

In 2005, Daneshi, who is from South Bay San Diego, Calif., had an aneurism. She suffered short-term memory loss, and was fired from several jobs for not remembering things. Her disability funds eventually ran out.

Just months later, she got her first cancer diagnosis.

Although Daneshi has a family history of cancer—her mother, sister, aunt, uncle and two sets of grandmothers all died of cancer—she didn’t know much about the disease.

“For the most part, I was on my own dealing with the aftermath of my brain surgery, all while trying to comprehend what cancer even was,” she said. “Once I accepted the truth about my illness, the doctors and nurses…really helped to make sure I was aware of my body and the surgical procedures. I am happy my doctor sat down with me to make sure I was aware of the seriousness about my cancer diagnosis.”

One man who called, Daneshi recalls, was an uninsured Latino immigrant with no legal documentation. He couldn’t get the cancer care his wife needed, and she died, and he was angry, confused, and broken. Daneshi related to him, comforted him, and vowed to do all she could to help him, and others like him, find peace.

Daneshi now channels her experience toward making a compelling plea—in both English and Spanish—for fellow Latinos to get cancer screening.

She makes this plea to people in many ways. She works with local public health professionals to deliver cancer prevention messages to people affected by cancer. She promotes the Affordable Care Act enrollment process as a counselor for Covered California. She also helped lead ACS’s Relay for Life cancer awareness fundraisers around the San Diego region, and was the first local volunteer to infuse the event with bilingual cancer education.

She also is part of the ACS Reach to Recovery and Look Good, Feel Good programs for cancer survivors to gain support and build relationships with other survivors.

Daneshi is also involved with the cancer awareness activities of Redes En Acción: The National Latino Cancer Research Network, which is funded by the National Cancer Institute. Redes has four offices—one in San Diego—and a headquarters at the Institute for Health Promotion Research at the UT Health Science Center at San Antonio.

“I learned that Hispanics don’t like to word ‘cancer’ and that if I stayed true to my big mouth, or my ability to ‘tell it like it is,’ people tend to respond with more willingness to accept my help,” Daneshi said.

Recently, Daneshi worked with a friend to start Princess for a Day, which gathers female cancer survivors at a country club to celebrate together on Valentine’s Day.

She also started a unique cancer support group. The group, which meets once a month at a local doctor’s office, aims to increase access to support for San Diego’s Spanish-speaking Hispanics affected by cancer.

“Alma is the epitome of a true cancer survivor,” Castañeda said. “She has a superb ability to take her own struggles and victories to inform and inspire Hispanics across the region to prevent cancer. She’s amazing.”