August 17, 2009. The nation’s 7th largest city has launched a pioneering campaign to become "smoke-free," and Redes En Acción researchers are playing a leading role in the effort. 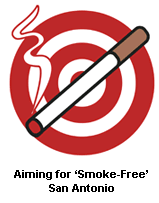 The new San Antonio Tobacco Prevention & Control Coalition (TPCC) (www.tobaccofreeSA.org) is a multi-organization partnership working to create and promote a "smoke-free" city with a tobacco prevention and cessation campaign to increase awareness of role models and effective resources to quit smoking.

The effort, which is funded by the Texas Department of State Health Services, is spearheaded by the San Antonio Metropolitan Health District and the Institute for Health Promotion Research (IHPR) at the University of Texas Health Science Center at San Antonio. Redes En Acción Principal Investigator Amelie G. Ramirez, DrPH, is director of the IHPR.

"This is an extremely important and ambitious undertaking that will surely have a positive influence on the lives of young people, adults and families – and potentially impact future generations of San Antonio citizens," said Redes investigator Luis Velez, MD, PhD, who is guiding IHPR’s efforts in the coalition.

Said Dr. Velez: "We hope to fight tobacco use by educating the public about the dangers of smoking and the benefits of cessation through brochures, news stories and billboards that feature local people’s stories about how they improved their lives by quitting smoking. We’re also increasing awareness of resources and support to quit."

Statistics from a 2006 youth tobacco survey and the Behavioral Risk Factor Surveillance System underscore the need for action: in San Antonio, more middle-school students were smokers than their counterparts in the rest of Texas (13.6 percent to 9.5 percent) and more adults smoked (18.3 percent to 17.9 percent).

Smokers are at higher risk for lung cancer and various other cancers and health problems, as well as premature death.

“We really hope to make a difference in preventing smoking and improving the health of San Antonio residents,” Dr. Velez said.