Set for launch in early 2009, a national Redes En Acción public awareness campaign will encourage Latinos to learn more about how they can protect themselves from cancer.

Six new PSAs (public service announcements) – produced by Redes En Acción in both Spanish and English – will be disseminated to television stations across the country. The PSAs and accompanying print materials are being developed in partnership with the National Cancer Institute’s Cancer Information Service (CIS). 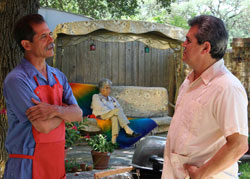 “Educating the Latino community about cancer is a major facet of the Redes En Acción mission,” said Amelie G. Ramirez, DrPH, Redes Principal Investigator. “These PSAs will help raise awareness by showing how we can all learn more and take action to protect ourselves and our families from this disease.”

Specifically, the 30-second TV spots encourage people to learn more about screening tests available for breast, cervical and colorectal cancers by calling the CIS toll-free telephone number (1-800-4CANCER). In addition, one of the PSAs focuses on the vaccine that can be taken beginning at age 9 to protect Latinas from the human papillomavirus (HPV), which causes cervical cancer.

The public education campaign addresses priority cancers and cancer issues facing the Latino population, as outlined in the Latino Cancer Report. The report, which was produced by Redes En Acción, found that access to care (and screening) was the number one issue and that the most important cancer sites with regard to Latinos are breast, cervical and lung cancers.

By topic, the PSAs focus on:

The bilingual PSAs, which were distributed to hundreds of Spanish- and English-language television and radio stations throughout the United States, won Telly Awards for their high quality. The spots are still airing on stations in some cities and have even found new venues in Puerto Rico and elsewhere.

As in the 2001 campaign, the new PSAs are culturally appropriate and rely on the knowledge and talents of a team of experts. Before final production, the PSAs were pre-tested by a representative sample of the target audience.