July 31 - August 1, 2008. By all accounts, the first-ever national gathering of researchers and community members focused specifically on cancer in Latinos served as a ground-breaking event. 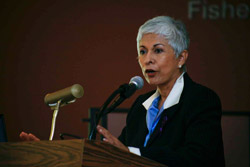 From participant evaluations and comments, as well as e-mail and letter correspondence after the event, the clear message from those in attendance was that "there is a future for the National Latino Cancer Summit," Durón said.

Much of the glowing feedback, she added, focused on the fact that the cancer discussions centered on Latinos.

"We heard an enthusiasm uncommon to these kinds of intellectual gatherings," said Durón "Much of the infectiousness and excitement resulted from turning a spotlight on Latino cancer issues."

"The National Latino Cancer Summit was an extremely ambitious undertaking," said Amelie G. Ramirez, DrPH, Redes En Acción Principal Investigator. "I applaud Ysabel and everyone who participated in the planning and implementation for a wonderful job. This conference provided food for thought for all of us who are involved in the Latino cancer field."

Durón said the Summit met its preliminary goals – to bring together Latino researchers and community agencies and educators, create opportunities for networking and collaboration, and provide a Latino cancer snapshot. However, she added, the conference has already produced some "unexpected" early outcomes:

From the polls, surveys and evaluations developed before, during and after the event, a Summit final report will be produced. In addition, a University of California, Berkeley Latino Student Task Force will develop a report based on on-site surveys collected by the group.