Redes meeting focuses on '2010 and beyond'

The 8th Annual NSC Meeting, which was moved to San Francisco so that its location and timing would dovetail with the first-ever National Latino Cancer Summit, served as a forum for various Latino cancer and health issues and spotlighted the past, present and future of the Redes En Acción program. The theme of the event was Collaborations and Sustainability – 2010 and Beyond.

"As a co-sponsor of the Latino Cancer Summit, we were able to increase the impact of both the Summit and the Redes NSC meeting by convening back-to-back in San Francisco," said Amelie G. Ramirez, DrPH, Principal Investigator of Redes En Acción. "The dual-conferences intensified the national focus on Latino cancer to a level that I believe is unprecedented."

At the NSC meeting, the Redes leadership heard speakers address a wide range of topics – from research, training and public education activities at Redes sites to a broad examination of global cancer issues. 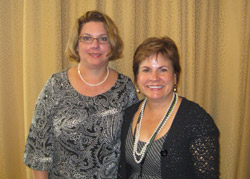 Among the achievements of the CNP, which includes Redes En Acción, is the funding of 35 studies so far through the pilot project research program, she said. Another 18 applications from 2007 have been recommended for funding through the pilot program, which has a goal of training junior investigators in community-based participatory research.

Now that Redes En Acción is nearing the third and final phase of the CNP, Dr. Canto asked that the initiative’s leaders address the following questions: 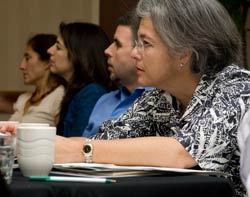 Another presentation directly related to Redes En Acción came from Noshir Contractor, PhD, Professor of Behavioral Sciences at Northwestern University, who described plans to survey 170 members of the Redes network. Goal of the project, he said, will be to analyze, visualize and interpret results of the "Redes effect" among the network of individuals, their organizations, projects and key research relevant to the network.

He said the overall goal for the project’s second phase will be to generate data that can be used to populate a portal to provide community members the opportunity to find resources, experts and referrals on resources (e.g., people, datasets, documents, analytic tools, instruments and protocols).

A considerably broader view of issues related to cancer was provided by Thomas Glynn, PhD, who discussed Cancer Beyond our Borders: Global Cancer & the Tobacco Burden. Dr. Glynn is Director of Cancer Science and Trends, and International Cancer Control, American Cancer Society.

The global cancer burden is growing, he said. Where in the past cancer was largely a disease of the developed world, today it is a serious issue in all parts of the world. Increasingly, the cancer burden will shift to the middle- and low-income countries, he added.

Several factors will influence the growth of cancer in the coming decades, especially in the developing world, said Dr. Glynn. The primary factors are growing and aging populations, continued impact of infectious agents, adoption of Western lifestyle behaviors, and growing tobacco use.

Tobacco alone accounts for 20-30 percent of the global cancer burden, he said. There are currently more than a billion smokers, and at least 300 million people alive today will die from tobacco-related disease, including 250 million children.

"Tobacco killed 100 million in the 20th century," said Dr. Glynn. "It is projected to kill one billion this century."