When Celia Thompson was diagnosed with breast cancer, little did she know that an even greater shock was in store -- when she learned a few months later that her 30-year-old daughter also had the disease.

Now cancer-free alongside her daughter, Celia was recently recognized by Susan G. Komen for the Cure, the leader in the breast cancer movement, and Ford's Warriors in Pink campaign for her courageous spirit and strength in battling her own cancer while supporting and inspiring her daughter. 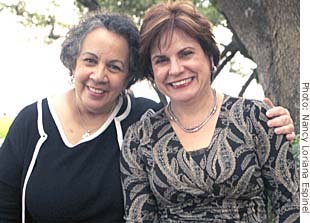 Celia is very familiar to those in the Redes "family" around the country. A long-time administrative assistant to Redes Principal Investigator Amelie Ramirez, DrPH, she has played a major role in the annual National Steering Committee meeting and other Redes activities over the years.

Diagnosed with Stage 1 breast cancer in 2005, Celia approached her cancer journey with a positive attitude, prayer and a fighting spirit, which she would need in the months to follow. Early in her treatment regimen, she encouraged her daughter, Jessica, to get a mammogram.

Jessica had just finished her medical school residency at Mt. Sinai Hospital in New York. As a physician, she was aware of breast cancer risks, but it didn't prepare her for the shock of learning two weeks later that she had Stage 3 breast cancer.

Receiving treatment concurrently, Celia would travel to New York on the off weeks of her treatment program to support her daughter. She found the strength to fight for both of them, and this odyssey produced a watershed of love in their relationship.

Since then Celia has shared her story privately and publicly, touching the lives of many people and encouraging the Hispanic community to educate themselves about breast cancer and early detection.

"Breast cancer doesn't set age limits -- it can affect any family -- and it's important that the Hispanic community understand this and talk about it," she says. "I'm honored that Ford has selected me as a Warrior in Pink and I hope I can use this to empower Hispanic women to step up and fight like a warrior because together we can eradicate this disease and make sure it doesn't touch our mothers, daughters and loved ones ever again."

This year Ford honored three Hispanic Warriors in Pink, donating $1,000 in each of their names to Komen for the Cure in the hope that all women will find the warrior spirit inside of them and no other family has to lose a loved one to breast cancer.

The initiative is coordinated by the Institute for Health Promotion Research at The University of Texas Health Science Center at San Antonio, with regional network centers in San Antonio, New York, Miami, Chicago, San Francisco and San Diego.